Hello! It's been a few weeks but we are back with a bunch of killer new records in the webstore ... I also added a ton of GOVERNMENT WARNING t-shirts in the store as well. Before I get to that, there are a couple of tours beginning this week that you need to know about.

DEEP SLEEP will be heading across the Atlantic for their first European tour. Dates are below, please try and make it out if they are playing near you ... you won't regret it as they are definitely a band you need to experience live and it's taken them a good five years to get over so who knows when they'll be back! They should have all of their releases with them including the TURN ME OFF LP (and some sweet new shirt designs as well).  Dates are posted at the bottom of this email.

NIGHT BIRDS will also be heading out on tour for a few weeks... they will be stopping off for a few shows at Chaos in Tejas in Austin, TX this weekend, followed immediately by a two week Midwest tour.  NIGHT BIRDS have also posted a brand new track, "Landfill Land," from their upcoming LP titles "The Other Side of Darkness."  You can check out the song on their Bandcamp page here: http://night-birds.bandcamp.com/ ... tour dates are listed at the end of this email as well.

First off, as I mentioned, I added a slew of GOVERNMENT WARNING t-shirts to the webstore.  Most of these were the leftovers from our February tour.  I also found a box of long lost GW shirts from 2006! Most of them were assorted left overs but they are all brand new dead stock t-shirts from about 4 or so years ago ... unfortunately quantities are very limited on both size and design so if you see a shirt you want best to order it right away because it might be the only one available.  These will probably be the last time you will be able to buy a lot of these designs and colors.

I also added a handful of year old NIGHT BIRDS t-shirts that I picked up off the band in April 2010 and never got around to putting in the store ... it's a pretty sweet two color design drawn by Brandon Ferrell (GW / Direct Control / No Way fame) that the band no longer sells, so once these are gone, they are gone for good. Only a few left of these as well.

As far as new records go, we've got the brand new debut LP from Richmond's DRY SPELL on new No Way Records "sub-label" VINYL CONFLICT RECORDS.  I've got a few copies on colored vinyl (ltd to 100) if you are into that, but not many so grab it quick (and of course plenty of black vinyl when those run out). Definitely pick this LP up and catch DRY SPELL on tour this summer because they are great live too.  Also on the new LP front, we've got the brand new LP from Germany's DEAN DIRG ... this band keeps cranking out the hits, definitely pick this up and check out their other releases if you haven't yet. I was also able to score a few copies of the ultra limited 12" from Houston, TX's PMRC.

I've got a ton of great new 7"s as well including the new releases from RAYOS X, CREEM, NAPALM RAID, DEATH FIRST, STOCKPILE, SHORT FUSE, NAUGHTY GIRLS and a bunch more.  I was able to pick up a few copies of the limited repress of the classic RIPCORD 'THE DAMAGE IS DONE" 7" (originally released as a flexi) ... a little pricey since it's a UK import, but of course well worth it ... i mean, it's RIPCORD after all ... it's also already sold out from the label. I am also excited to finally have copies of the most recent titles on NO PATIENCE RECORDS out of Australia ... definitely check out the WARCHILDREN, SHOCK VALUE, BLOODCLOT FAGGOTS, and LOGJAMMERS 7"s!!!  Finally, I picked up some copies of the US pressing of The Shitty Limits "Yesterday's Heroes" 7" from 2007

A couple of restocks of note from STATIC SHOCK in the UK ... I was able to score a bunch more copies of both the BRAIN F≠ "Restraining Order" 7" as well as the URBAN BLIGHT "Total War" 7" ... both of these records are incredible and are definitely recommended.  The Brain F≠ 7" is limited to 500 copies and this will probably be one of the last chances to grab copies in the US so don't forget to pick that up! In semi related news, I found three more copies of the SHITTY LIMITS "Espionage" 7" as well ... I believe this one is OOP and I haven't had it available for a little while, but it's back in the store. Finally, I was lucky enough to grab a few more copies of the awesome NEON CHRIST "Parental Suppression" 7" reissue (semi-legit). A definite must have, 80's hc classic and this reissue is done well all around.

That's all for now ... I've got a ton more distro stuff headed my way over the next few weeks so keep your eyes peeled for future updates. Also, two new LPs have been sent off to the plant this past week so expect updates on the NIGHT BIRDS LP and BRAIN F≠ LP in the very near future. Thanks for reading! 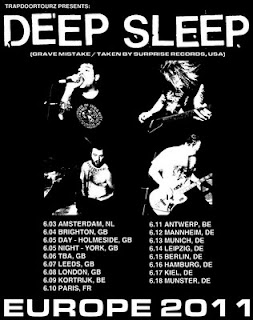 This tour is being booked by Flo at TRAPDOOR TOURZ, if you need to contact him please email: info@trapdoor-tourz.de 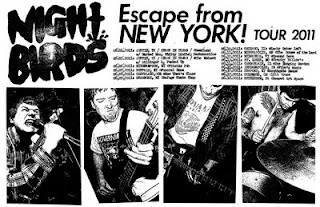