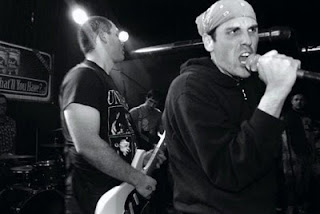 Sorry for the absence of posts the past few weeks ... hopefully I'll be back to posting regularly next week.

Anyways ... CARDIAC ARREST have decided to venture out of the midwest once again (a rare occurrence), and will be heading out on a full West Coast tour starting at the end of this month!  The handful of times I've been lucky enough to catch them over the years, they've always blown me away. Please go check them out if they are playng near you, you won't be disappointed. These shows look sick too ... I wish I was going.

I was told they will have some sort of new music most likely in the demonstration cassette format.