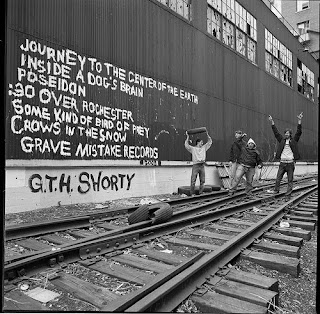 Stumbled upon a ton of BAD BUSINESS photos courtesy of my good bud DAN BRESS who played guitar in Bad Biz and currently plays in the awesome DEAD MECHANICAL.  Looks like it might be every live photo ever taken for the band ... glad to have caught them a bunch especially in Rochester, they always got an great reaction there.  Fun times.

The BAD BUSINESS 7" was release #3 for GRAVE MISTAKE, if my memory serves correct it came out in May or June of 2003, right as I was moving (or had just moved) down to Richmond from MD.  I asked the band to do the 7" a few months after my first two releases came out (late 2002, I think) ... from the start of the label, I wanted to keep it's focus on what was going on locally, but I couldn't pass up the opportunity since I thought the band ruled and they were all awesome guys. Plus, at the time there was a really strong tie between Rochester and Baltimore ... bands like Bad Business, Standfast, and The Disaster were pretty much honorary local bands, so it made perfect sense to do their 7" as my third release.

This photo above was from a set they took for the back of the 7" ... they went out to some abandoned industrial area in Rochester and painted the song titles on the side of a warehouse.  Still holds up as probably one of my favorite layout ideas for a GM release. I thought it was cool that there was some warehouse in Rochester with "GRAVE MISTAKE RECORDS" and a bunch of song titles from a record painted really big on the side of it, but apparently the warehouse burned to the ground, bummer.

The 7" is long gone (although I'm sure it wouldn't be too hard to track one down), Nick Third Party and I did a CD Discography for the band as well (I think it might be missing one unreleased song, but I could be mistaken), and that's pretty much gone too. Here is a link for the CD if you were interested in checking it out.  It has one unreleased song, 2 songs off the Third Party Records "Bridging Oceans" 10" comp, the 7", and the demo. Enjoy!

Also, preorder the new DEAD MECHANICAL LP at Toxic Pop Records!
Posted by GraveMistakeRecords at 9:15 AM