As I promised in the last update, I'm trying to let less time go by in between updates ... especially since I've been getting a ton of rad new records in, it would be  a waste not to make them all available as soon as possible.  Hopefully you have some cash left over from the last update, because this one has a lot of sweet stuff in it ...

First and foremost, the newest GRAVE MISTAKE release is out now! "Six More Reasons to Hate the Ladies" is the fourth 7" from Richmond's one and only LADIES ... as the title says, six more blasts of unadulterated punk rock sleaze. I think this might be their best EP to date ... a great mix of high octane Dwarves-esque rippers mixed with a couple of mid tempo cuts with a hint of melody that wasn't really as prevalent on their earlier records, but really adds to their sound.  And of course, lyrical content that you definitely won't want to repeat in front of your parents or significant other.  I can see this record appealing to everyone from garage punk scumbags to obnoxious ramone-clone loving pop punk nerds (and everyone in between) but I'll let you be the judge.  Anyways, the record rules so you should definitely get it.  We did 200 copies on nice macho pink vinyl to match the cover art  ... so go ahead and order one!

Aside from that, I have a bunch of other great releases in the distro as well.  Luckily the list isn't as overwhelming as the last update, but there is just as much quality stuff nevertheless ...

First off, I've got the long awaited CHRONIC SICK reissues on NO WAY RECORDS ... the vinyl showed up on wednesday and aside from ordering direct from NO WAY themselves, I think I'm currently the only place you can get these right now online.   Two very hard to find early 80's cult classics, you definitely need to pick both the 12" and the 7" up!  If you are looking for colored vinyl, you can order direct from NO WAY RECORDS but if your nerd tendencies aren't flaring up tonight, the black vinyl I have in stock sounds just as good!  And don't let these reissues overshadow the new ACID REFLUX "Moves" 7" also on No Way ... that thing is a beastly ripper!

In other reissues, the PROTEX LP is incredible. The SING SING label always comes through with delivering some punk and power pop gems, this LP is no exception ... I highly recommend checking out some of the other releases on this label (especially the RUDI 7"s).  Another highly recommended reissue in this update is the NARDCORE classic, STALAG 13's "In Control" LP ... obviously not as obscure or hard to find, but just as essential!

In CURRENT releases, I finally got my hands on the newest Painkiller 7"s from KNIFE FIGHT and VACCINE, some new 7"s from DOUCHMASTER: a new single from GENTLEMAN JESSE and new one from NOBUNNY; the newest output from Australia's own UV RACE (who are currently in the US on tour now w/ TOTAL CONTROL); a handful of new DIRTNAP releases including the MEAN JEANS / WHITE WIRES split 7", new LPs from AUTISTIC YOUTH and GOODNIGHT LOVING, and my pick of the bunch, the new LP from THE ESTRANGED!  I've also got the newest european only 7" from Chicago's own NO SLOGAN, as well as some other cool singles from NO PROBLEM, WICCANS, VILE INTENT, HAMILTONS, and more!

On the CORE front ... I picked up a bunch of stuff from 6131 and Triple B records, including the crushing new ALPHA & OMEGA LP (on limited GREEN vinyl), both 7"s from hometown heroes FIRE & ICE (which features ex IRON BOOTS and DOWN TO NOTHING members), and a killer split from Wilkes Barre's finest, BAD SEED and WAR HUNGRY.  In addition to all of the new vinyl, I picked up a couple of new tapes and zines as well, including a DESKONOCIDOS collection cassette .  Oh and I also scored some much needed restocks on records like the MUCH WORSE 7", COKE BUST LP, HATRED SURGE 7", MARKED MEN s/t LP, and a bunch more ... 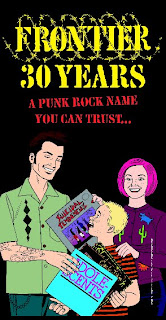 FINALLY ... as you know I don't really do many "sales" in the distro, but I actually have one going right now and it's a pretty cool one.  As you may or many not know, this year marks FRONTIER RECORDS' 30th anniversary as a label ... as weird as it is to say, I don't know what I'd be listening to now or where I'd be if i hadn't picked up a cassette of the first SUICIDAL TENDENCIES record or a beat up copy of the CIRCLE JERKS "GROUP SEX" LP when I was first getting into punk ... not to mention all of the other awesome records and reissues that FRONTIER has under their belts (ADOLESCENTS, CHRISTIAN DEATH, DANGERHOUSE Singles comps, MIDDLE CLASS, WEIRDOS, etc ...) .... so as a way to say "thanks" to this label for being awesome and to hopefully turn some people on to some of my favorite bands, all of the Frontier vinyl in the Grave Mistake webstore is super cheap this month (LPs are $8.50, 7"s are $3.50)... now I know you are probably thinking, who DOESN'T have a copy of GROUP SEX or the Blue album sitting in their collection? But you know, sometimes these things happen. So check your record shelf, if you are missing any one of these records, now would be a good time to grab what you've been missing ... all of the Frontier stuff on sale can be found here: FRONTIER RECORDS SALE!

Anyways, that's all for now ... one of these days I'll get around to doing an official label update to let you all know what is coming up for the rest of the year. Until then ... thanks for reading and thanks for the support!