Give the full record a listen HERE of you haven't yet. The US pressing is out next week on GRAVE MISTAKE RECORDS ... preorders went up a couple of weeks ago and they begin shipping this week!

We've got some nice RED VINYL available for mailorder still so grab a copy while you can! Record comes with a sick 24x36 poster!

ORDER IN THE WEBSTORE!
BUY ON BANDCAMP!

You can also pick up some other COKE BUST releases in the Grave Mistake store, as well as the new RED DONS "Notes on the Underground" 7" which will also be out next week (shipping this week too!!!)

Here is what INVISIBLE ORANGES had to say about "Confined":

"Coke Bust’s Confined, the newest 12″ Taser from Washington, D.C.’s fastcore ambassadors, starts with a squee. This isn’t deserving of a headline in itself. Plenty of punk, sludge, noise rock, and more have used amp feedback as either sonic wall art or a thought-linking, conversational “uhm.” Coke Bust, though, use the squee like a remote control, channel surfing through punk’s past blast by blast.

Squee. Infest. Squee. Slapshot. Squee. Government Issue. Squee. It clicks until it acclimates and then it clicks again. This is by design. “We wanted to write a lot of songs and then cut everything that didn’t fit or wasn’t 100 [percent] killer,” the quartet’s website notes. The sections remaining are payoffs and exclamation points, a big bowl of shelled pistachios. Confined is only the meat. Nine tracks, nine minutes, never a wasted second. The only warning shot you’ll receive is a well-timed squee.

Of course, one could get the wrong impression and think this album might be information overload, or a disjointed disaster petering out as soon as you internalize the quick shifts. However, Coke Bust are not in this thing for B-movie jump scares. The million-miles-per-hour momentum avoids stalling due to a focus on craft, a tightening of any loose nuts and bolts. The group’s drive to distill and their practice-one-more-time philosophy ensures the parts of this ‘core collage are right where they need to be for maximum effect. It does take leaps. Large ones. Yet, it doesn’t stop to steady itself or stretch. It’s just on to the next one, albeit by priming its muscles with snare rolls and four-string harbingers of powerviolence punch-ups. In that way, it’s akin to a fighter operating five steps ahead. Confined is forever on the hunt for the next opening to shoot through a jab, maintaining its form with an underlying da-da-da-dun rhythm, like a universal hardcore heartbeat.

Coke Bust have made a sort of Group Sex or Blood, Guts, and Pussy for the straightedge set. If that causes one’s eyes to roll, know that this album is free of long, dry soliloquies from an x-ed up Slamlet. It has got worldly matters on its mind, dressing its black circle in a cover which will be as unpopular with your warhawk friends as Raise the Bullshit Flag. Besides, the band has often mentioned in interviews they’re not out to be bold and judge the youth of today. If you imbibe, fine. They do not. And, really, it’s nothing to worry about. Open up and enjoy the ruckus. You’re a squee away from a fresh perspective anyway." 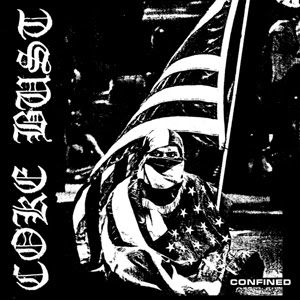 Posted by GraveMistakeRecords at 11:31 AM