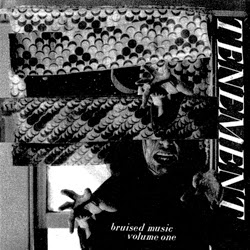 "Tenement mopped the floor with conventional showmanship the second they walked in the door. With their eyes closed and their heads tilted toward the heavens, they've been known to stand still in the spotlight and let their glorious noise ring out, naked and uninhibited. This isn't a hateful noise, but it is a sincere one that if received by a perceptive audience, can tug at the gut and induce a primal shiver from the mind to the heart. Perhaps this honesty can be attributed to their Midwestern stereotype, or perhaps they are in fact true outsiders among their Rock and Roll peers. No matter which, the curiosity that is Tenement began in 2006 with a series of loose demo recordings and singles that married the genres of "Pop" and "Punk" without being explicitly "Pop Punk" and to many, represented the power and urgency of Hardcore without actually conforming to the genre itself. These recordings have been compiled here by Grave Mistake Records and Toxic Pop Records for their new collection LP, Bruised Music, Volume One, which covers Tenement's output on record between the years 2006 to 2009.

The influence of 80's punk is strong in the bulk of the material on Bruised Music, likening the feeling of The Descendents or The Replacements. However, this comparison might seem lazy when you keep in mind that the members of Tenement had long schooled themselves on everything from The Beatles to Big Star, Sun Ra, Coltrane, Black Flag, Husker Du. Obscure hardcore punk to Brill Building pop music and all points in between. The period of time represented in this collection is a period of growing pains that paved the way for them to become the band that they are today, and the band that they will be many years from now. It's the birth of a strong creative force; the musicians together learning to crawl, and the great American outsider pop group taking its first steps. Grace and elegance go out the window on this one. It's clumsy and ugly at times. Its breath stinks and its pimples show. It talks loudly in a quiet room. It speaks its mind and spares no sensitivity. It's Tenement's Bruised Music."

**********************************
The first of two installments of singles collections from Wisconsin's TENEMENT will be officially out March 10th! Bruised Music Volume One will feature Tenement's earliest material, compiling a total of ten tracks taken from the Tenement Sucks tape, Dead Broke and Dirt Cult Records mixtape compilations, split w/ Used Kids, split w/ Friendly Fire, False Teeth 7", and Icepick 7".  All of the material has been remastered by Daniel Husayn at North London Bomb Factory for one cohesive and superb sounding anthology.
You can hear the remastered version of the song "Spaghetti Midwestern" streaming over at IMPOSE now alongside a quick interview about the release.

It's an honor for us to be able to get all of this early material back into print and in one place (including the first vinyl appearance for a handful of these songs), and we hope that this release will find its way into the ears of many more people who will enjoy and appreciate the formative years of a prolific, captivating, and truly inspiring band.

Bruised Music Volume One is a split release with the wonderful Toxic Pop Records, and the record will be available for preorder the second week in Februrary.

This year is shaping up to be quite a productive and momentous year for Tenement, and we couldn't be more thrilled to get the ball rolling with this retrospective release.