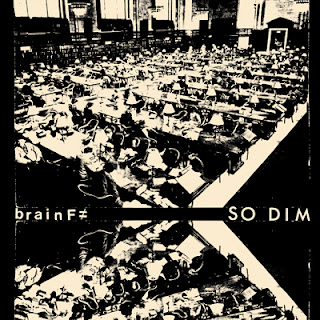 BRAIN F≠ "So Dim b/w Symptom Set" 7" (GRAVE044) OUT NOW!
Well here it is, the first of many new GRAVE MISTAKE releases for 2011! I'm extremely thrilled to bring you the second 7" single from Charlotte, NC's BRAIN F≠ … "So Dim / Symptom Set"  is an overblown mindfuck of garage punk goodness;  furious overdriven guitars, booming rhythm section, killer dual female / male vocals … after releasing a very impressive demo last year under the moniker BRAIN FLANNEL, they released their debut "Restraining Order" 7" on the UK's STATIC SHOCK last month and have been hard at work writing and recording new material for an LP later this year.
I've got 60 copies of the "So Dim" single on RED VINYL (out of 100) in the webstore now, as well as a handful of copies of the "Restraining Order" single as well … I highly recommend picking up both. You can order them in the webstore here:
BRAIN F≠ "So Dim" 7"
BRAIN F≠ "Restraining Order" 7"
BRAIN F≠ "So Dim B/W Symptom Set" 7" (GRAVE044)
North Carolina’s BRAIN F≠ bring you their second single; “SO DIM” b/w “SYMPTOM SET” is a double A-sided banger with all the overdriven/overloaded guitar fury of TEENGENERATE or ZERO BOYS and the angry female-fronted charm you love from so many DANGERHOUSE & early L.A. singles. Massive rhythm section a la AVENGERS and NERVOUS EATERS, hook-filled & danceable, the hardest of core. Hostile, angry fun - the perfect follow up to their debut 7" on Static Shock (UK).

BRAIN F≠ "Restraining Order B/W God No" 7" (STATIC SHOCK)
Following from a well received demo tape (under the name Brain Flannel), the debut 7” from North Carolina, USA’s Brain F (featuring members of Logic Problem and Grids) is now available to order. This two track 45 kicks off with Restraining Order, which was originally on the demo, and definitely one of the more catchy tracks to be committed to vinyl this year. I saw them described once as “when X (US), X (Australia), Teengenerate and Messthetics collide”, and as dumb as that may sound, it actually makes sense. The songs are bass driven, have scratchy guitar-work and have really impressive interloping male/female vocals that make this stand out.

If my word isn't good enough, here are some reviews in case you need more convincing:

"North Carolina's BRAIN F offer up two cuts of jangly, abrasive punk on their second single.  Each side of this 45 spins by in two minutes, loud and in-the-red.  Dueling male/female vocals shout out above trebly guitars and blown out drumming.  There's a definite "wave" inflection in BRAIN F's sound, though it's nasty and subversive.  Think of groups like LOST SOUNDS or THE SPITS.  This is scum music played by intellectuals who have created something primal, yet evolved.  With each spin of the record you realize there is a little more to BRAIN F than you thought there was at first." - GOT MYSELF ZINE

"Alex at Grave Mistake describes Brain F≠’s new single, “So Dim,” as well as their “Restraining Order” debut as “mandatory buys for the beginning of the year.” I agree, even if I’ve only heard this one, “So Dim.” It’s disorienting, to say the least. Both tracks clock in at around the two-minute mark, and are blasts of fuzzed-out garage punk.  The a-side, “So Dim,” and the b-side, “Symptom Set,” are just dense. Everything is packed so tightly that you almost can’t breathe as you’re listening to the songs. The layers - guitars, bass, and vocals - are fitted together in such a way that the title track doesn’t have any empty space. It’s like a typewritten page that’s been single-spaced and written in all capitals: you can understand what’s being presented, but it feels a little tense and claustrophobic. You’re left with the sense that someone’s very high-strung.  This is the perfect musical accompaniment to several well-sugared cups of espresso and a pack of unfiltered cigarettes." - ROCK STAR JOURNALIST

"This gem of a 7″ comes to us from Grave Mistake Records. This is the band’s second 7″ single with their previous one being on Static Shock Records in the UK. This was my first introduction to this band and I was instantly reminded of X-Ray Spex and Kim Gordon’s side project, Free Kitten. This 7″ is now in my regular rotation and is quickly becoming a favorite spin. The songs are quick, raw and full of energy. This is the first must have 7″ of 2011. The record comes with a digital download card so that you can enjoy this on the go as well, which you will want to do. Pick this 7″ up and don’t look back." - FOOLIOS.COM

"Grave Mistake Records is starting out the new year with a bang, this 7″ is their first release of 2011 and they’ve already set the bar high for themselves. What we’ve got here is truly the first great 7” of the year. Everyone else needs to step up their game if they want to compete with this in 2011. This is Brain F ≠’s second 7″ and even though it’s only two songs it kicks a lotta ass, like this record is really brilliant. I’ve already listened to it four times in a row and it doesn’t look I’m getting tired of it anytime soon. Super fuzzed out old sounding punk rock with dual vocals, it’s got lots of raw energy blasting out of it. Lyrically this record isn’t very uplifting but it’s a lot of fun to listen to. Go out of your way to get this one if you have to." - UNCLE CRITIC

UPCOMING RELEASES:
Here's a quick status update … DEEP SLEEP "Turn Me Off" LP had a slight delay, but it's being taken care of so expect an update on that soon (I'm waiting to make sure everything is ready to go with this release before opening up preorders).  BAD ADVICE vinyl is in, still trying to finalize the art. COKE BUST vinyl is also in, should have those ready in a few weeks.  THE SHIRKS vinyl should be in shortly, also trying to finish up art on that. Finally … GOVERNMENT WARNING "No Moderation" LP … yup, you guessed it - I have the vinyl but just waiting on the covers. I'm hoping that all of these will be ready and shipping by this time next month, so keep an eye out for updates!