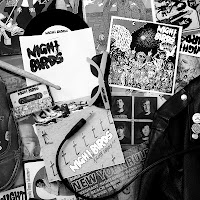 August 21st will see the 12" vinyl release of New Jersey/New York's NIGHT BIRDS Fresh Kills Vol. 1 singles and demo collection (originally released on CD format in 2011), courtesy of Richmond's Grave Mistake Records. The album will consist of the band's first three now out of print 7" singles and 2009 demo.  It can currently be streamed at the Grave Mistake Records Bandcamp page here:

Preorders will be available from both the band and the label in early August and the band will have advanced copies on the road with them for their upcoming tour across the West Coast.   The band will also play a record release on August 25th at the Acheron in Brooklyn, and August 29th at the House of Vans, also in Brooklyn (all tour dates below).

@ House of Vans
25 Franklin St.
Brooklyn, NY
Posted by GraveMistakeRecords at 10:40 AM