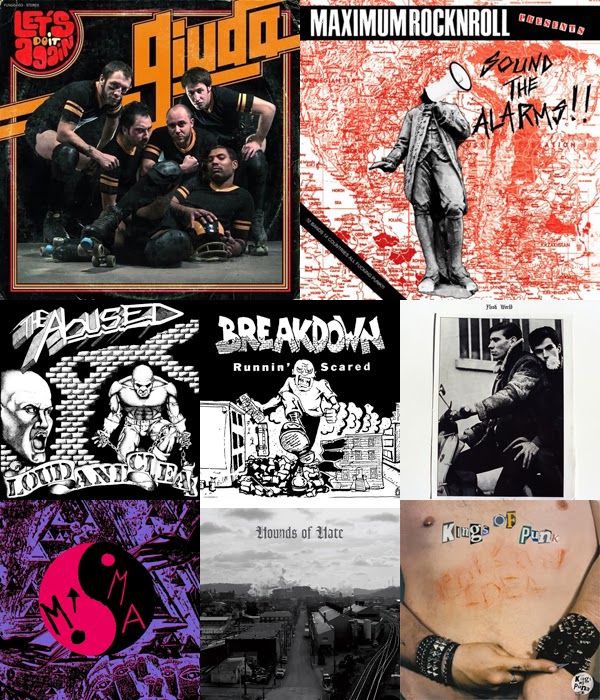 Here is a quick update for you … got a couple of GREAT new releases in like the new GIUDA "Let's Do It Again" LP on TKO , and "Sound the Alarms," an awesome 2xLP International punk compilation from MAXIMUMROCKNROLL!!

Here is the list - check it!!! You can click the title to go straight to the record in the webstore.

SACRILEGE "DEMOS 1985" LP (RADIO RAHEEM)
1985 was a transitional time for the hardcore scene in NYC — the original class of '82 bands were either in limbo, had disbanded or were heading into a more crossover metal direction and the Revelation/straight edge scene and second wave of NYHC bands were a year away from fully exploding. Along comes Sacrilege, formed in late '84, and their aim to couple Discharge-inspired sonic fury with a peace punk aesthetic. Bassist Adam Mucci's previous tenure in Agnostic Front gave them a safe pass from skinheads, and along with guitarist Victor Venom, previously in Reagan Youth, they recruited two Virginia Beach transplants and Sacrilege was born. Their confrontational style of spiky hair, Crass stencils on jackets and military fatigues give voice to a totally separate group that longed for a band of their own. They played less than a dozen shows and imploded by late 1985. One can only guess how they would have fared as their sound and style laid the foundation for the parallel Squat Or Rot scene that sprung up during the late 1980's.  Victor would take several Sacrilege songs into his next project, Nausea, the most notable being "Fallout", which became the signature Nausea tune as heard on the Revelation Records' The Way It Is compilation LP. The nine short, sharp cuts from the Don Fury sessions and the six howling, primitive metal workouts from Bolt Studios, both recorded in 1985, bear witness to an overlooked band that provides a missing link to the development of hardcore punk in the rat cage of a big city we know as New York.  Includes 12x24 poster and lyric sheet

CHAOTIC DISCHORD "FUCK RELIGION, FUCK POLITICS, FUCK THE LOT OF YOU" LP (RADIATION)
Chaotic Dischord was formed by roadies of Vice Squad who wanted to take on the sound of bands like Disorder and Chaos UK but ended up creating this record which stands next to those bands in terms of quality and urgency.  "Fuck Religion …" is their debut LP which came out on Riot City Records in 1983.

CRAZY SPIRIT "S/T" 7" (TOXIC STATE)
Another much-needed repress from Toxic State! In light of what they've become, it's almost kind of amazing that Crazy Spirit ever sounded like this. I've personally spent the most time with the demo, the LP, and the I'm Dead 7" and I kind of gave short shrift to this EP, but it's a total ripper and completely different from their other releases. This is definitely the clearest and most bottom-heavy recording the band ever got. Compared to some of their other stuff they almost sound straightforward here, but those menacing vocals and off-kilter riffs ensure that you know you're listening to a Crazy Spirit. This is really one of my favorite bands of the past decade, and you need everything they've released, so if you don't have this you know what to do...

UNKNOWN TO GOD "UNNAMED TERRORIST GROUP" 7" (HARDCORE VICTIM)
New on Hardcore Victim with distribution by Havoc, Unknown to God play aw blazing hardcore with rasping desperate vocals. There is a heavy influence of Japanese hardcore here, and many people may remember this band from their split with Deathcage.